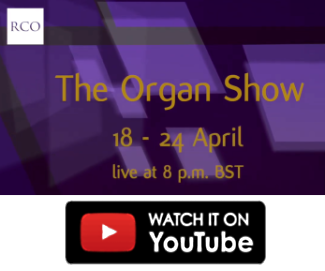 In April 2021 we celebrated organs, organ music and organists around the world with a week of online broadcasts leading up to interNational Organ Day.

The Organ Show is still available for catch up viewing on the RCO YouTube channel at www.youtube.com/rcofilms [you can click the Watch It On YouTube graphic, right, to visit now].

The Organ Show was produced to inspire non-organists to engage with the organ, seek out organ music and events, to learn to play, and to support the work of the RCO in developing new generations of musicians and enthusiasts.

In a message of support (below, right), HRH The Prince of Wales said: “It is with the greatest pleasure that I welcome you to the Royal College of Organists’ Organ Week and International Organ Day, a week-long exploration of the organ in its many guises in the United Kingdom, and culminating in a global celebration.

“[...]As Patron of many church conservation charities, I have a great interest in this “Wondrous Machine”, as Henry Purcell described the organ so memorably in his “Hail! Bright Cecilia”. Its playing has been central to important national events for longer than any of us can remember. Therefore, I hope the forthcoming broadcasts will prove immensely enjoyable and that they may inspire some to consider taking lessons, as it is vital that we continue to produce the players who can ensure that the many splendid instruments with which this country is blessed can delight us in years to come."

Sunday 18 April was also designated RCO Choral Day to highlight the work organists and choral directors are doing to maintain, enthuse and develop their choirs in the current climate.  Among the guests, Hugh Morris, Director of the Royal School of Church Music, spoke about the role of the RSCM in developing and encouraging church music.

Monday 19 April focused on the grassroots work of local organists’ associations, in sponsoring students, training, and supporting parish organists.  David Saint, Chair of the Incorporated Association of Organists, was ‘on the sofa’ in the studio.

Cinema and theatre organists took centre stage on Tuesday 20 April, with organist Richard Hills whisking visitors from the organ of the spectacular Blackpool Tower Ballroom to the equally splendid Wurlitzer in the Troxy in the East End of London.

On Wednesday 21 April the team took a look at organs in locations other than churches and chapels, highlighting the contribution organ playing makes to ceremonies within other traditions such as Freemasonry, and how these organisations support initiatives across the country to help people learn the organ. Organist Carl Jackson played live from the grand Henry Willis & Sons organ in the splendid Art Deco setting of Freemasons' Hall in London.

The week’s celebrity recital was given by Stephen Farr on the superb Harrison & Harrison organ at All Saints, Margaret Street, with its magnificent Butterfield interior, on Thursday 22 April.  The recital included music by Christopher Steel, Dupré, and the world premiere of First Flight by British contemporary composer Cecilia McDowall. Please note that for performing rights reasons, this recital is no longer available on our YouTube channel for catch up viewing.

Youth was the focus on Friday 23 April, with a look at initiatives to introduce young people to the organ, including a panel discussion between a group of well-known music educators.

A number of projects unfolded throughout the week, with viewers able to follow an organ builder at work, and watch as artist Michael Alan-Kidd created a painting entitled ‘the organ lesson’ to be auctioned on the Saturday. Highlighting the importance of improvisation in organ performance, a top organist improvised live each day, using a theme selected by the online audience just a few minutes before. Improvisors included Gerard Brooks, Martin Baker, Richard Hills, Carl Jackson, Ronny Krippner and David Briggs.

The week drew to a rousing finale on interNational Organ Day 2021, Saturday 24 April, with contributions submitted by organists from around the world. American Guild of Organists (AGO) Executive Director James Thomashower joined the programme, and the show visted Germany (where the organ has been declared ‘Instrument of the Year 2021’) for organ music and interviews.

The day concluded with a live performance of Zoltan Kodály’s late masterpiece Laudes Organi from St Paul’s Knightsbridge,a secular piece commissioned for organ and choir in 1966 for the National Convention of the American Guild of Organists.  Dan Ludford-Thomas was the conductor, with the choir of St Paul’s Knightsbridge, and James Orford at the organ.

To watch again, or to catch any programmes you missed, please visit the RCO YouTube channel at www.youtube.com/rcofilms or click the ‘Watch It On YouTube’ graphic at the top of this page.

For any questions or comments on interNational Organ Day please email us on internationalorganday@rco.org.uk