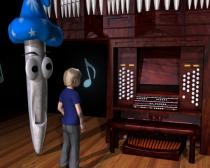 A short film telling the story behind the award-winning Dan and the Magic Musician animation is now available to watch on the internet.

The original animation, an eight minute film commissioned by the Royal College of Organists from the University of Bradford, was designed to introduce young people to the organ and as a resource for teachers.

It tells the story of young Dan who, with the help of the Magic Musician, finds out that because so many different types of pipe go together to make up an organ, it can make an incredible range of music and sounds – leading them to declare “it’s the greatest musical instrument of all”. The film is freely available to pupils and their teachers at www.DanMagic.org, along with additional information on learning to play the organ.

Now, alongside the original film, a short history of the project is available to view at www.danmagic.org/creatingdan.htm. ‘Creating Dan’ looks at the story behind the project, at the role of the RCO and the work of University of Bradford’s School of Informatics in bringing the film to life.

RCO head of outreach and education Simon Williams said: “Dan and the Magic Musician has received a terrific response from around the world, and this ‘making of’ film provides a great insight into the enormous amount of work involved by a team of people in putting the animation together.”