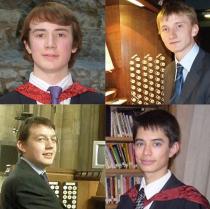 Four young organists have been selected by the Royal College of Organists to feature in recitals at this year’s Three Choirs Festival.

Each of the four has been selected for their outstanding performance in achieving the College’s ARCO diploma over the last 18 months.

The Three Choirs Festival, held each year since the early eighteenth century, and rotating between the three great cathedral cities of Gloucester, Worcester and Hereford is one of the world’s oldest classical choral music festivals. The 2009 Festival takes place in Hereford from August 8th to 15th.

For more information on the Three Choirs Festival, and the Young Organist Recitals, visit www.3choirs.org/home.