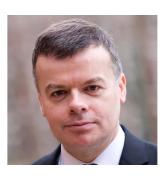 Martin Baker, Master of Music at Westminster Cathedral, has been announced as the next President of the Royal College of Organists (RCO).

Mr Baker will serve as President Elect until July 2017, when he will succeed current RCO President Philip Moore.

He will then serve as President until June 2019.

As Master of Music at Westminster Cathedral, Mr Baker directs the Cathedral’s world-famous choir, and leads the music programme there.
As an organ soloist he won first prize in the Improvisation Competition at the St Albans International Organ Festival in 1997, and he remains internationally renowned for his skill in organ improvisation.

He regularly performs solo recitals throughout the UK as well as in Europe, the USA, and Russia. His 2014 gala performance at Royal Festival Hall marked the Grand Finale of the RCO’s year-long 150th anniversary celebrations.

He said: “It is a great honour to be offered this role, and to succeed such a distinguished musician as Philip Moore.

“The 150th anniversary celebrations, in which I took part together with hundreds of organists across the UK and abroad, revealed a great degree of affection for the RCO and a real appreciation of the vital work it does.

“The College has already done a huge amount to build on that momentum, and I am delighted to have the opportunity to support the further developments which I know are in the pipeline.”