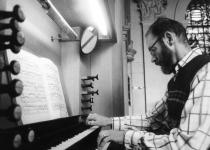 It is with great sadness that the College learnt recently of the death of James Dalton.

James was awarded Associateship in January 1950 and Fellowship in July 1952. He was for many years an RCO council member and an examiner, and played a significant role in the development of the College in the 1980s and 90s. He was chair of the Library and Publications Committee for a while and was a member of the editorial board which oversaw the founding of the first series of the RCO Journal in 1993. James’s fascination with many types of repertoire, but especially pre-1800 repertoire, led him to make a most generous endowment to the RCO over a number of years so that new editions might be acquired by the College library. The Dalton Bequest made a considerable impact on the size and scope of the sheet music holdings.

James Dalton studied at the Royal College of Music with George Thalben-Ball and (when Thalben-Ball was away for a term) with Ralph Downes. This turned out to be of enormous importance, particularly as it came at the time when Downes was working on the completion of the Royal Festival Hall organ. On leaving the RCM, James was encouraged by Downes to travel to The Netherlands, where he met Dirk Flentrop (Downes arranged this) and visited magnificent organs such as the Van Hagerbeer/Schnitger organ at Alkmaar. James’s reminiscences of this visit—after taking the ferry to the Hoek, he cycled his way north to the Flentrop factory and then on to Alkmaar—and of this seminal period are recounted by him in a recent article in the BIOS Journal (2014) dedicated to the RFH organ. James Dalton subsequently became organ scholar at Worcester College, Oxford and then graduate assistant at Oberlin College, Ohio and organist of Wesleyan University, Connecticut. He became organist of The Queen’s College, Oxford in 1957, a post he held until 1995. He was also a Fellow of The Queen’s College, and a university lecturer in music.

It was the building, at James’s instigation, of the Frobenius organ at Queen’s in 1965 which marked him out as a figure of new vision and enterprise—and, for some, no doubt a figure of eccentricity. Along with the RFH organ, the Queen’s organ played an immensely important role in the so-called organ reform movement as it manifested itself in Britain. Its quality and beauty of design made an immediate impact and set new standards and challenges for British organ-builders. Showing a preference for early music, James gave many recitals in the UK, across Europe (including the USSR) and in the US. He made a number of recordings and took part in frequent broadcasts; he wrote articles and reviews, and these were mainly concerned with keyboard music and its interpretation.

James will be forever thanked for his eighteen-volume anthology of early organ music for Faber Music. He not only acted as the series editor of the Faber Early Organ Series: European Organ Music of the Sixteenth & Seventeenth Centuries (1986–88), but he also undertook specific editorial duties on nine of the volumes himself, in the process investigating, with an immaculate choice of repertoire, Spain and Portugal, France, and Italy. These are practical performing editions for a modern age and they espouse excellent editorial standards. His particular interests in Iberian music are further confirmed by the publication of an article on this topic in the Cambridge Companion to the Organ (CUP, 1998). As noted above, James was a founder member of the panel which founded the RCO Journal, and he submitted eloquent and richly illustrated articles in the first series on both Buxtehude’s organ music and his church music.