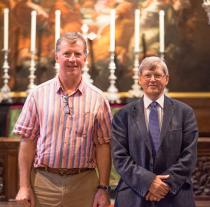 The winners have been announced in the composition competition organised by The Orgelbüchlein Project and RCO.

The judges, Philip Moore, William Whitehead and Nicholas Riddle, Managing Director of Edition Peters, announced the two overall winners at the end of the evening.

The shortlisted compositions, in order of performance, were: