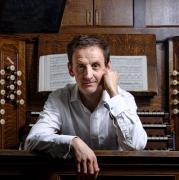 The Royal College of Organists has appointed Stephen Farr as its new Chief Examiner.

Recognised as one of the finest organists of his generation, Stephen combines a busy freelance playing career as soloist, continuo player and accompanist with the post of Director of Music at St Paul’s Knightsbridge, one of London’s most prominent churches.

As Organ Scholar at Clare College, Cambridge, Stephen Farr graduated with a first class degree in music, later obtaining an MPhil in Musicology with Prof John Butt and completing in 2014 a PhD in music performance at the University of Surrey with a thesis on the organ and harpsichord works of Judith Bingham.

Since winning the Royal College of Organists’ Performer of the Year competition in 1988 and securing prizes at international competitions in Odense, Paisley and St Albans, Stephen has enjoyed recognition as a solo performer at international level, with appearances in North and South America, Australia, and throughout Europe.

He maintains a regular broadcast presence, and as a recitalist features frequently in the main series of the major concert venues in the UK. He has an extensive accompanimental and solo organ discography (recent recordings include the complete works of Kenneth Leighton and works by Judith Bingham), and is active as commissioner and performer of new music for organ, including works by Judith Bingham (The Everlasting Crown, BBC Proms 2011 and Roman Conversions, Royal Festival Hall 2017) and Edward Cowie (Cathedral Music I, broadcast live on Radio 3 this month).

Stephen has held appointments at Christ Church Cathedral, Oxford, Winchester Cathedral, and Guildford Cathedral, where he was Organist and Master of the Choristers from 1999 to 2007. He has also held positions at Worcester College, Oxford and Corpus Christi College, Cambridge.

Stephen begins work as RCO Chief Examiner this autumn, in succession to Patrick Russill who stands down after 12 years in the role.

Welcoming the appointment, RCO Director of Studies Andrew McCrea said: “This is a significant role for which we were seeking not only an organist of the very highest calibre, but also someone who possessed excellent academic credentials and a broad vision.

“Stephen stands out as someone who offers a remarkable blend of experience and skills in each of these respects, and we are delighted to confirm his appointment as Chief Examiner.”

The RCO’s accreditation programme comprises a suite of diploma examinations and a newly founded early-level certificate scheme in organ playing. Aside from organ playing, the College also accredits the related disciplines of organ teaching and choral directing.

The diploma and early-level awards programmes are overseen by the institution’s Academic Board, which is chaired by the RCO’s Director and comprises the College’s management team and a number of co-opted members representing a broad range of professional and educational interests.

The role of Chief Examiner is to support and build the quality and reputation of the College’s accreditation programmes, with responsibilities including the scrutiny of examining procedures; advising on the appointment of examiners; and developing regulations, syllabus content and assessment criteria in line with Academic Board policies.