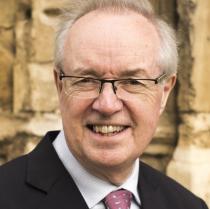 It is with great sadness that the College has learned of the death of Sir Stephen Cleobury, who served as RCO President from 1990 to 1992. He was also a long-standing council member and examiner, and served as Hon. Secretary from 1981 to 1990.

In 1982 he took up the post of Organist and Director of Music at King’s College, Cambridge, where he was also conductor of the Cambridge University Musical Society from 1983 to 2009. He also served as Chief Conductor of the BBC Singers 1995 to 2007, going on to become their Conductor Laureate.

Through his incorporation of contemporary music into his choir’s repertoire, most famously with his commissioning of a new carol each year for the Festival of Nine Lessons and Carols, Sir Stephen will be remembered as someone who helped recharge the writing of contemporary choral music. He was made a CBE in 2009 and knighted earlier this year for services to choral music.