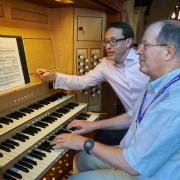 The Royal College of Organists has announced a wide-ranging programme of courses, classes and events for organists throughout the first half of 2020.

With the RCO’s two Early English Organ Project (EEOP) Tudor organs now in residence at Eton College, a full-day event on 8 February provides a rare chance to explore these instruments and to hear them in concert, alone and with voices. The RCO Tudor Organs and their Music will feature sessions by organ builder Dominic Gwynn and Patrick Russill (Royal Academy of Music and Director of Music, the London Oratory).

The year’s classes start with a boost for performance skills in London on 4 February. This early evening Advanced Performance session at St George’s, Hanover Square will provide an invaluable chance to gain expert advice on interpretation, technique and performance skills from Dr Iain Quinn (Associate Professor of Organ and Co-ordinator of Sacred Music at Florida State Music).

In Glasgow, James Lancelot (Canon Organist Emeritus of Durham Cathedral) will be exploring British organ music of the 19th century in a masterclass on 14 March. Exploring Victorian and Edwardian Organ Music will feature the fine 3 manual organ of St John’s Renfield, and is followed by an afternoon recital by James Lancelot. Also in Scotland, Ben Bloor will be leading an RCO Masterclass in St Salvator’s Chapel, St Andrews, on 7 April.

Choosing and Performing Contemporary Organ Music will be the focus of a class with Tom Bell in Chaddesley Corbett, Worcestershire on 28 March. Darius Battiwalla will be leading a Performance Class at Leeds Town Hall on 25 April, while across the Pennines in Manchester on 4 July, Simon Mercer will be holding an Organ Management class at Holy Name.

A series of linked classes in Norfolk for church organists begins in Thetford on 8 February with Choosing and Performing Voluntaries. The series continues in Diss on 29 February with Hymn and Worship Song Playing, before concluding in Norwich on 21 March with a Confident Performing class with Julian Haggett.

Turning attention to the requirements of the College’s diploma examinations, Fugal Techniques for ARCO and FRCO in Southwark on 15 February will lead students through the techniques necessary for the written paper fugue question.

Develop your Sight Reading and Transposition in London on 14 March will see Marilyn Harper giving organists of grade 5 and above strategies to develop these skills which are so important not only for examination success but also to aid the faster learning of repertoire and the mastering of other musical techniques such as improvisation.

Preparing for CRCO, ARCO and FRCO in Huddersfield on 4 April is an invaluable opportunity for diploma candidates to prepare, and allows students to book for all or part the day depending on which aspect of the examination requirements they wish to cover. A second diploma study day will be held in Dulwich on 20 June.

Relevant to RCO diploma candidates but with much wider interest as well, Thomas Allery will be teaching two classes on Continuo Playing in Cheapside, London on 25 April and 16 May.

Also in London, Catherine Ennis will be helping students Play Bach (Even) Better on 21 March, while Anne Marsden Thomas will be repeating by popular demand her Advanced Hymn Playing class on 18 April.

Last but certainly not least, booking is open for the College’s three flagship residential courses.

RCO Easter Course is based in Merton College, Oxford from 15-17 April. This highly-regarded three-day course provides in-depth tuition for those preparing to take (or considering) the College’s diploma examinations. A Repertoire & Skills strand is also provided for non-examination candidates who play to ARCO or FRCO or equivalent standard.

The Organ Student Experience runs from 21-26 July in Cambridge. Directed by Daniel Moult, the course is for teenage organists of grade 7 level and above, especially those preparing for or considering auditioning for organ scholarships at universities or cathedrals/churches, or for conservatoire entry. Detailed and focused tuition is provided in graded groups in repertoire performance, keyboard skills, and choral conducting and accompaniment. The associated TOSE-in-a-Day event on 21 March at St George's Hanover Square, London, is ideal preparation for those coming on the course, as well as those who can't attend and those not quite ready.

The ever-popular RCO Summer Course for Organists runs from 3-8 August. Based at St Giles Cripplegate Church and using up to 20 other pipe organs in or near the City of London, this course offers tuition for complete beginners up to diploma level, and at all stages in between. Known as ‘the big course with the personal touch’, the week provides a mix of individual lessons, essential skills classes, masterclasses in graded groups, tuition in church music skills, improvisation tuition, performance opportunities in daily services and student concerts, and individual practice time.

Details and booking for these events plus others yet to be confirmed, will be found on the events page of this website.