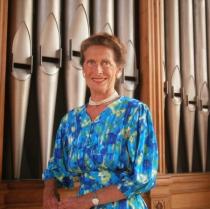 With great sadness the College has learned of the death of Jennifer Bate. She was the daughter of H A Bate, organist of St James, Muswell Hill, in London, and studied theory and composition with him from a young age. She became a member of the RCO in July 1966 and within a year had achieved both ARCO and FRCO. She became a favourite at all the world’s great festivals, performing in over 40 countries: last year she celebrated a 50-year career as a full-time professional organist.

Her father emphasized the importance of working with living composers, inviting them to come and hear her playing their music and advise her on how to play it better - leading to long-standing friendships with composers including Sir Lennox Berkeley, Peter Dickinson, Flor Peeters and Peter Racine Fricker.

Jennifer was recognised as the world authority on the organ works of Olivier Messiaen with whom she worked extensively. She gave the British premiere of his Livre du Saint Sacrament, and her recording of the work won a Grand Prix du Disque. In 2011, President Sarcozy appointed her to the rank of Chevalier de la Légion d’Honneur, with the citation Organiste, Spécialiste de l’oeuvre de Messiaen. The same year, the French government also awarded her the rank of Officier de l’Ordre des Arts et des Lettres for her work worldwide to help French organ music capture a wider audience.

As well as the works of Messiaen, Jennifer’s discography includes the music of Elgar, Stanford, Whitlock, the Wesleys and their contemporaries, and the complete organ works of Franck and Mendelssohn.

Composers including William Mathias and Naji Hakim wrote for her, and her own compositions for organ, written for concert performance rather than liturgical use, were frequently commissioned for particular events or instruments.

Jennifer gave the opening celebrity recital at the Royal Festival Hall in 2014 after the refurbishment of the Hall and organ, and acted as organ consultant when the Harrison & Harrison organ at St James Muswell Hill, installed by her father after the war, required restoration, giving the reopening recital in October 2011.

Jennifer pioneered programmes to introduce the organ to children. She was a Patron of the Society of Women Organists, formed last year, and her annual Jennifer Bate Organ Academy, now in its 15th year, is a unique course promoting all-round musicianship for young women.