New RCO film series: An A-Z of the Organ 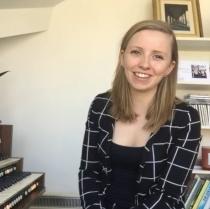 The RCO has launched a new series of 26 videos entitled An A-Z of the Organ, filmed entirely during the Covid-19 lockdown.

Starting with A for Anthology and concluding with Z for ... (wait and see!), the series aims to explore various perspectives on the organ -- its tonal characteristics, some of the repertoires associated with it, a range of organ-related tips and resources, and more besides.

Our thanks to the many organists who have helped us to create this series, all working from home during the height of the UK lockdown.

We launch the series today with A for Anthology by Andrew McCrea (RCO Deputy Chief Executive and Director of Studies) and B for Bach by Anna Lapwood (Director of Music, Pembroke College, Cambridge (pictured)).

Meanwhile, in Bach, Anna discusses three very different but engaging pieces by Bach, which will enrich your repertoire and stretch your technique. Click here to watch on iRCO or here to watch on YouTube.

The rest of the series will be released over the coming weeks on the College’s online content hub iRCO, and also on the College YouTube channel at www.youtube.com/user/rcofilms. Follow us on Twitter @RCO_Updates and Facebook @RoyalCollegeofOrganists for updates as the films are released.