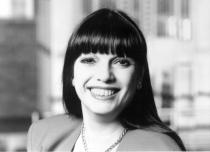 The College was saddened to hear of the sudden death of concert organist Jane Parker-Smith, at the early age of 70.

Jane studied at the Royal College of Music, winning a number of prizes and scholarships, including the Walford Davies Prize for organ performance. After further studies with Nicolas Kynaston, and with Jean Langlais in Paris, she made her London debut at Westminster Cathedral at the age of 20. Two years later she made her first solo appearance at the BBC Proms at the Royal Albert Hall, and went on to perform in concert halls, cathedrals and churches throughout the world.

She was the featured artist at several American Guild of Organists’ National Conventions, and her extensive concerto repertoire brought performances in major venues and at international festivals with leading orchestras around the world, working with conductors including Sir Simon Rattle, Carl Davis and Matthias Bamert.

She recorded a wide range of solo repertoire for RCA, Classics for Pleasure, L’Oiseau Lyre, EMI, ASV, Collins Classics, Motette and AVIE, and collaborated with Maurice André in a duo recording of music for trumpet and organ. She performed numerous times on radio and television with special feature programmes on the BBC, German and Swiss television.

The Sunday Times described her as ‘the Martha Argerich of the organ’, and her playing is remembered for its virtuosity and excitement. Jane is also remembered for her ability to reach out to people who were not necessarily of the organ world, with her vivacity and great sense of fun.