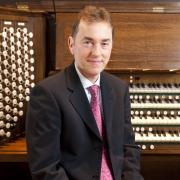 The Royal College of Organists has congratulated Thomas Trotter on the award of the Queen’s Medal for Music 2020.

Writing on behalf of the President, trustees, staff and members of the College, RCO Chief Executive Sir Andrew Parmley said:

“I write to congratulate you on the outstanding accolade of the award of The Queen’s Medal for Music.

“You have been an outstanding representative of the very best in organ playing for many years, and will remain such, I hope, for many more years to come.

“Your example has been an inspiration to countless players of all ages who have been inspired by your dedication and influenced by your artistry.”

Thomas Trotter is one of Britain's most widely admired musicians. He has had a special relationship with the City of Birmingham since he was appointed City Organist in 1983 after Sir George Thalben-Ball based at the city's renovated historic Town Hall where he is also Resident Organist of the magnificent Klais organ in Symphony Hall. He is also Organist at St. Margaret's Church, Westminster Abbey, in London. Earlier in his career he was organ scholar at King's College, Cambridge, and he later continued his studies with Marie-Claire Alain in Paris where he took the Prix de Virtuosité in her class.

Thomas Trotter has been awarded the Royal Philharmonic Society’s prestigious Instrumentalist Award, International Performer of the Year Award for 2012 by the New York City Chapter of the American Guild of Organists and, in 2016, the Medal of the Royal College of Organists.