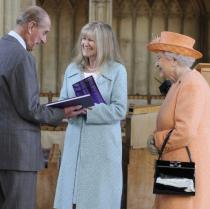 With great sadness the College has learned of the death of Catherine Ennis, of cancer, on Christmas Eve 2020. She had been Organist and Director of Music at St Lawrence Jewry in the City of London since 1985, and President of the RCO from 2013 to 2015.

An Organ Scholar at St Hugh’s College, Oxford, she became Assistant Organist of Christ Church Cathedral, in an era when such positions for women were scarce. She joined the RCO in 1978. She was a Trustee of the RCO from 2012 to 2016 and Vice-President from 2015, and was also a diploma examiner over many years. As an RCO accredited teacher she was hugely popular with students who came to her for individual lessons, and as artistic director of the RCO Summer Course for Organists in 2017, her warmth of personality and encouraging and reassuring manner proved a hit with the diverse student body.

Her classes for RCO Academy always elicited much positive feedback, both for the knowledge she imparted and for the confidence she inspired in those attending. All this was largely with adult students, but she was also a wonderful teacher on the TOSE Course, gently cajoling sleepy teenagers first thing in the morning with humour and energy, and providing them with expert advice, clearly expressed in the teaching sessions.

Ennis was a dynamic and energetic force in the organ world, being responsible for the creation of four new organs in London, including the 2001 Klais in St Lawrence Jewry. She also founded the London Organ Concerts Guide, and was president of the Incorporated Association of Organists from 2003 to 2005.

In 2006 Ennis initiated (together with Barbara Hill) the John Hill Organ Series, which showcased emerging young talented organists in a series of Tuesday lunchtime recitals in the City each May. Most recently she became a patron of the Society of Women Organists.

Concert engagements in recent years included Christ Church Spitalfields, Westminster Cathedral, and the Royal Festival Hall. She recorded works by J.S. Bach, Reubke, Guilmant, and English romantic composers, among others; her latest CD for Priory Records of works by various composers on the Peter Collins organ in St Bartholomew’s Church, Orford, was released in October 2020.

Catherine Ennis was awarded the Medal of the Royal College of Organists in 2018. The citation for the Medal [click to download] details her huge contribution to the planning and execution of the College’s 150th Anniversary celebrations in 2014.

The photograph was taken during the College's 150th Anniversary celebrations at St George's Windsor, 9 April 2014, in the presence of our Patron, HM The Queen, when Ennis (as President) presented a gift to HRH The Duke of Edinburgh.