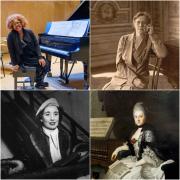 An annual celebration of women composers has been launched by the Royal College of Organists and the Society of Women Organists.

Sunday 7 March 2021 - the nearest Sunday to International Women’s Day on 8 March – will be celebrated as Woman Composer Sunday.

On Woman Composer Sunday the RCO is asking Members to post on their websites and social media accounts a recording, video and/or live-stream link to a performance of themselves or another organist playing an organ piece (or pieces) written by a female composer, with the hashtag #SWORCOWomanComposerSunday.

The piece can be of any length or degree of difficulty, and for inspiration, SWO and the RCO have published a joint repertoire list [download here], which includes a note of the playing standard for each piece, as well as sources and a brief description.

The list covers nearly three centuries of composition for the organ by female composers, with suggestions of music from Anna Amalia of Prussia and Theophania Cecil, both born in the 18th century, through to pieces by living composers including Sally Beamish, Maija Einfelde, Rachel Laurin and Errollyn Wallen.

RCO Chief Executive Sir Andrew Parmley said: “This is a great opportunity to show the world just how much great organ music has been written by women.

“We already include music by women composers in the repertoire for our Diploma examinations, but it’s been exciting to work with colleagues in SWO in unearthing much more.”

Ghislaine Reece-Trapp, Co-Chair of the Society of Women Organists, said: “Throughout history women have composed music, despite many suffering restricted access to education and opportunities.

“Now we live in a more welcoming culture, enriched by diverse voices and experiences, and eager to uncover the counter-narratives of the past.”

More on women composers for the organ can be found in a new article in the RCO’s online magazine, StopPress [read here].