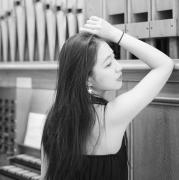 Organist Wenying Wu has been announced as the winner of the IAO-RCO Organ Playing Competition.

Wenying, who studies church music at the Franz Liszt University of Music in Weimar, was praised by the judges for her committed and electrifying performance of a bold and challenging programme, and for her conviction and consummate technical control.

Second prize in the competition was shared between Merle Hillmer, a student of church music in Leipzig, and Ashley Wagner, Assistant Head of Music at Birmingham Cathedral.

The final of the IAO-RCO Organ Playing Competition, which is open to organists between the ages of 18 and 26 years, was originally due to be held as part of the IAO Festival in Edinburgh in July 2020. When the festival was postponed because of the pandemic, the final was moved to a virtual format in which the six finalists submitted recordings of their playing on instruments across Europe.

The six performances and the adjudication were released online on 24 July and can be viewed at https://conference.rco.org.uk/iao-rco-organ-playing-competition/

In announcing the results, John Kitchen said: “The standard overall was very good indeed, with some truly outstanding performances.”

Gerard Brooks said: “It has been a great pleasure to listen to six extremely promising young organists playing such a wide range of repertoire from all periods. All showed an impressive understanding of different musical styles, coupled with a very high level of technical ability. Well done!”

Ann Elise Smoot added: “It was a joy to hear all of these up-and-coming young organists, and to hear them making music on instruments at which they were totally at home – matching their choices of music to different, suitable instruments – was very satisfying.”