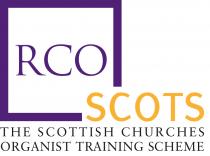 The Royal College of Organists (RCO) has taken responsibility for the management and delivery of the Scottish Churches Organist Training Scheme (SCOTS).

SCOTS was founded in 1997 as an ecumenical scheme geared to the needs of all denominations. It aims to find and encourage emerging organists in Scotland, as well as to help those already in posts to develop their skills.

Welcoming the announcement, RCO Vice President George McPhee said: “I am delighted to give my fullest support to the new partnership of SCOTS with the RCO.

“This integration will not only provide security for SCOTS but also add new goals and interest for its members.”

Andrew Macintosh, RCO Director for Scotland and Northern Ireland, and SCOTS administrator since 2017, said: “I am very excited that the RCO is strengthening its involvement with SCOTS. I am looking forward to building on the scheme’s achievements over the past 25 years and to continuing engagement with our partners in the scheme as our participants resume their work helping to lead worship in Scottish churches.”

RCO Chief Executive Sir Andrew Parmley added: “SCOTS is a popular and effective programme which focuses on developing the skills and understanding of organists in ways which contribute to a more satisfying experience of worship for the whole congregation.

“We are delighted to be able to welcome SCOTS to the RCO family, and look forward to supporting and developing it still further in the years to come.”