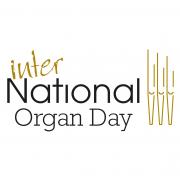 Organs, organ music and organists around the world will be celebrated in a week of online broadcasts leading up to interNational Organ Day on Saturday 24 April.

With global pandemic restrictions still in place, The Royal College of Organists (RCO) has turned interNational Organ Day 2021 into a fully online event, and made it the culmination of a full week of broadcasts running from 18 to 24 April.

Each live daily programme will feature a mix of interviews, chat, features and studio guests, and explore different themes.

The aim is to inspire non-organists to learn to play, seek out organ music and events, and support the work of the RCO in developing new generations of musicians and enthusiasts.

RCO Chief Executive Sir Andrew Parmley explained: “The organ is a truly unique and wonderful musical instrument which is inspiring to hear and thrilling to play.

“Sadly, far too few people get the chance to experience this. Long-term trends such as the decline of music education in schools have been compounded dramatically over recent months by the pandemic restrictions which have seen so many instruments fall silent.

“We hope that by taking interNational Organ Day online as part of a full week of broadcasts, we can help to put this right, reaching people right around the world and inspiring a whole new generation to embrace the King of Instruments.”

Sir Andrew will host the daily programmes live from a studio in London, along with British soprano Cheryl Enever. Organist and broadcaster Anna Lapwood will be a guest interviewer throughout the week.

Cheryl’s father was an organist, and she has worked extensively with many of London’s leading organists. She said: “It’s time the fantastically varied world of the organ was better known. After this week, it will be!”

Sunday 18 April is also designated RCO Choral Day to highlight the work organists and choral directors are doing to maintain, enthuse and develop their choirs in the current climate. Among the guests, Hugh Morris, Director of the Royal School of Church Music, will speak about the role of the RSCM in developing and encouraging church music.

Monday 19 April focuses on the grassroots work of local organists’ associations, in sponsoring students, training, and supporting parish organists. David Saint, Chair of the Incorporated Association of Organists, will be ‘on the sofa’ in the studio.

Cinema and theatre organists will take centre stage on Tuesday 20 April, with organist Richard Hills whisking visitors from the organ of the spectacular Blackpool Tower Ballroom to the equally splendid Wurlitzer in the Troxy in the East End of London.

On Wednesday 21 April the team take a look at organs in locations other than churches and chapels, highlighting the contribution organ playing makes to ceremonies within other traditions such as Freemasonry, and how these organisations support initiatives across the country to help people learn the organ. Organist Carl Jackson will be playing live from the grand Henry Willis & Sons organ in the splendid Art Deco setting of Freemasons' Hall in London.

The week’s celebrity recital will be given by Stephen Farr on the superb Harrison & Harrison organ at All Saints, Margaret Street, with its magnificent Butterfield interior, on Thursday 22 April. The recital includes music by Christopher Steel, Dupré, and the world premiere of First Flight by British contemporary composer Cecilia McDowall.

Youth is the focus on Friday 23 April, with a look at initiatives to introduce young people to the organ, including a panel discussion between a group of well-known music educators, moderated by Anna Lapwood.

A number of projects will unfold throughout the week, with viewers able to follow an organ builder at work, and watch as artist Michael Alan-Kidd creates a painting entitled The Organ Lesson to be auctioned on the Saturday. Highlighting the importance of improvisation in organ performance, a top organist will improvise live each day, using a theme selected by the online audience just a few minutes before. Improvisors include Gerard Brooks, Martin Baker, Richard Hills, Carl Jackson, Ronny Krippner and David Briggs.

The week will draw to a rousing finale on interNational Organ Day 2021, Saturday 24 April, with contributions submitted by organists from around the world. American Guild of Organists (AGO) Executive Director James Thomashower will join the programme, and the programme will visit Germany (where the organ has been declared ‘Instrument of the Year 2021’) for organ music and interviews.